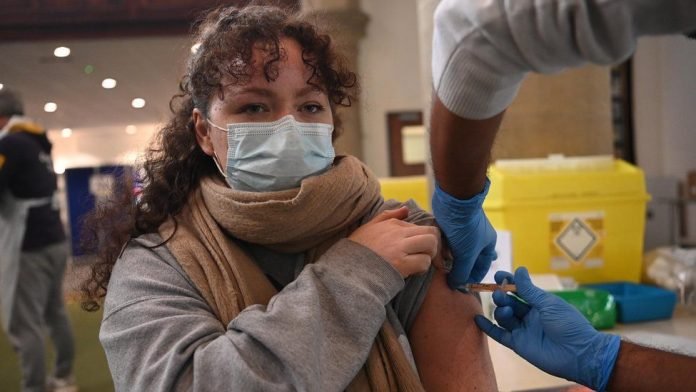 More than 20 million people in the UK have now had their first dose of a coronavirus vaccine.

Prime Minister Boris Johnson called it a “huge national achievement” and said “every jab makes a difference in our battle against Covid”.

The government is aiming to offer all adults a first jab by the end of July.

But the head of NHS Providers – which represents hospital trusts in England – warned there was “a long way to go”.

“We’re not even close to half way through this programme,” said Chris Hopson. “And there’s a further challenge: to design a workforce model to enable us to do this year in year out.”

While he welcomed the milestone, he added: “As we set out in our recent briefing, we need to see more progress on vaccines, lower Covid-19 case numbers, much less pressure on the NHS and plans in place to contain future outbreaks before easing restrictions.

“Now is not the time to let down our guard.”

The government’s next target is to offer a first dose to all over-50s by 15 April, as well as people aged 16-64 with certain underlying health conditions and unpaid carers for disabled and elderly people.

After that, people will be prioritised by age group.

There are no plans yet to vaccinate children, although trials have been announced to test the Oxford-AstraZeneca jab on children.

As revealed recently, nearly two million people aged 60 to 63 in England will start receiving letters inviting them to book their vaccine.

Mr Johnson said on Twitter that the 20 million milestones was “a testament to the tireless work of NHS staff, volunteers, the armed forces and many more”.

“I urge everyone to get the jab when called,” he added.

Health Secretary Matt Hancock also said it was “a magnificent achievement for the country” and the vaccine was “our route out”.

According to the figures published, the 20 million milestone was reached after a further 407,503 jabs were administered in one day.

Meanwhile, NHS England said people in the 60-63 age bracket would start receiving letters on Monday explaining how to book a jab through the national booking service, with those aged 50 to 60 set to be invited “shortly”.

It said the vaccine rollout was gaining “fresh momentum”, with medical director Prof Stephen Powis urging anyone who had been invited to take up the offer.

“It doesn’t matter when you were invited you can still come forward and protect yourself and others,” he said.