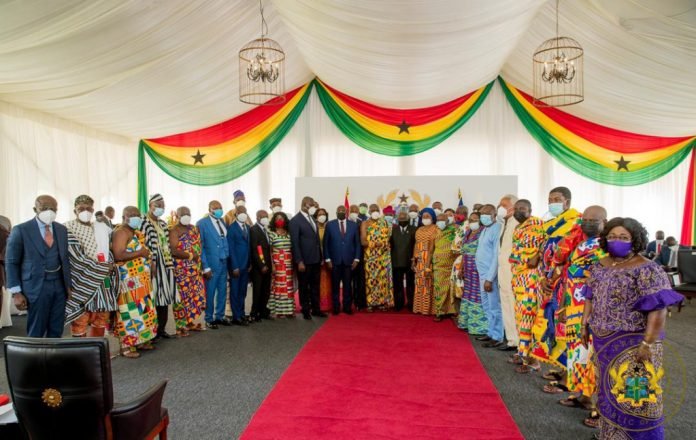 President Nana Addo Dankwa Akufo-Addo has sworn in the members of the eighth Council of State, with a charge on them to offer honest advice to deepen democracy and help advance the development of the country.
President Akufo-Addo administered the Oath of Allegiance, the Oath of Membership of the Council and the Oath of Secrecy to the 31-member council.

After that, each of the members received the instrument of appointment contained in a red, gold and green scroll, with the black star in the middle.

The members, majority of whom were members of the seventh council, both appointed and elected, also signed the Oath Book, which the President sealed by appending his signature.

The colourful ceremony, which lasted about two hours and organised in strict adherence to the COVID-19 protocols, took place at the Jubilee House in Accra yesterday.

President Akufo-Addo described the seventh Council as the best so far in the Fourth Republic and expressed the hope that the eighth would do the same and offer great advice based on unvarnished truth to the President for the development of the country.

He noted that such advice should not undermine the independence of any of the other arms of government, especially the Judiciary.

President Akufo-Addo said Ghanaians had elected a Parliament that had virtually equal representation between the two major parties, a move that imposed on the principal actors of the state an obligation to consciously and deliberately seek consensus in all public undertakings.

He said the Council of State was well positioned to contribute to that development and welcomed a vigorous exchange of ideas between the two parties and expressed the wish that the new Council would help in that direction.

President Akufo-Addo further said because of the creation of six new regions, the membership of the council had increased from 25 to 31, with six more elected regional representatives.

That development, the President explained, would be the subject of deliberations between the Executive and the Legislature.

Touching on the role of the council, he explained that aside from its advisory role in the appointment of people to high offices, the council had a broad scope of advisory functions in counselling the President, including in the sensitive exercise of creating new regions.

He referred to Article 19 of the Constitution, based on which the President could request the council to consider amendments to bills either before they were passed or even after their passage by Parliament.

The President stated that Article 91(3) gave the council what appeared to be an unfettered remit to advise other bodies, such as Parliament or any other public authority, and said in his view, that did not mean that it should be a busy body, but that on matters of significant national importance, the council could let its views be known.

President Akufo-Addo said between the council and the Presidency, there was work to be done to get all the appointments in place and get the government machinery to work.

The Chairman of the eighth Council, Nana Otuo Siriboe II, spoke on behalf of his colleagues and gave an assurance of their commitment to give fair and sincere advice.

“Be assured, Mr President, of our commitment to give fair and sincere advice at all times that will promote the national interest. We shall spare neither strength nor effort to ensure that we make such worthy contributions as will enable you to leave a lasting and sustainable legacy to posterity,” Nana Siriboe, who also chaired the Seventh Council of State, stated.

He said having worked closely with the members of the last council, most of whom would also serve in the eighth, as well as the new members, he was certain that the eighth council would be stronger in serving the people with humility, professionalism, patriotism and loyalty.

Nana Siriboe said the courage, independence and frankness of the previous council which made its work helpful to the President and his government, coupled with the good rapport and dialogue between the council and the Presidency, made the work of both parties successful.