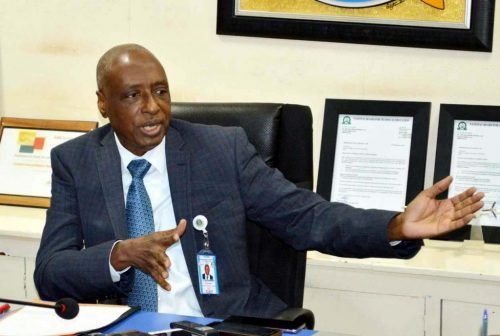 The Rector of the Nigerian College of Aviation Technology, Zaria, Captain Abdulsalami Mohammed, in this interview calls for the establishment of aircraft leasing companies in the country. He also speaks on other issues. Excerpts:

What is the current situation with the plan of the Nigerian College of Aviation Technology (NCAT), Zaria, to acquire additional 20 Diamond aircraft to uplift its operations?

The supply is for 20 aircraft. That was DA42, which has two engines and 15 DA40, which is single engine aircraft. Because of budgetary constraint, we could not order for the entire aircraft at once. So, we ordered for the aircraft in batches. When I assumed duty in 2017, the college took delivery of only one DA42 AIRCARFT. This was because when the initial orders were placed, the aircraft were manufactured, but due to the failure of the college then to make payment, the manufacturer decided to sell the aircraft. So, they couldn’t get the aircraft any longer. So, we said we were not going to place any other until we have money. So, last year, I placed orders for six DA40 aircraft, we made all the payments that is required to guarantee the payment of the aircraft. We are going to perform factory acceptance check on these aircraft in the third week of January 2020 and thereafter, by two weeks after that, sometime in the mid-February or so, the six aircraft would be delivered to Zaria. This will greatly enhance our training capacity. With the delivery of these aircraft, we intend to place order for the batch of another aircraft. So, we will be ordering them in batches until we take delivery of the 20 aircraft.

How do you conduct on-the-job training for the staff so that they would continue to be aware of latest advancement in the industry?

We have three types of training at NCAT. There is the training that we provide at the college. When we are conducting training, we involve our staff. When we identify training needs in certain departments or units like record keeping, computer appreciation, these are courses we conduct at the college, rather than sending them to conduct it outside the college. We also have training, which we send our staff to do either in Kaduna or Abuja. Then, we have foreign training, which involved technical ones that are licenses. These training are required of them to maintain the currency of their licenses. In 2018 alone within the college, we trained 104 staff and in 2019, we trained 181 of our staff within the college. In addition to that, we have sent over 80 people in batches to public services institutes in Abuja annually for training and these trainings cut across the ranks. That is from security men, cleaners up to the chief inspector. We didn’t differentiate. We recognise the need for these kinds of trainings for being civil servants; for civil service rules and procedures by the public service institute, which is ongoing and we carry this on annually. I keep trying to explain to people to stop looking at training as their welfare. Training is not a welfare, but for capacity building. Foreign training is for licensed staff like pilots, Air Traffic Controllers, aircraft maintenance engineers and instructors. All these ones are NCAA (Nigerian Civil Aviation Authority) requirements for recurrent training. In addition, we also send the staff to do attachment on the industry. For ATC, they go to the facilities of the Nigerian Airspace Management Agency (NAMA). For the pilots, ground instructors, we send them to the airlines and for the engineers also go to the airlines and the maintenance organisations. So, all these are parts of the local trainings.

How far have you gone with the Postgraduate diploma programme you commenced few weeks ago?

The Postgraduate Diploma (PDG) we are running in Lagos has been a success. This is the second course that we are running outside Zaria. The first one is our license preparatory course for the engineering school, which we are going to complete this month. Already, we have had request for another one. We have realised that there is a huge demand for NCAT to conduct site courses. So, in the next few years, we are going to be conducting more courses especially in Lagos where there is huge concentration of aviation personnel in the country.

Is it possible for NCAT to expand its runways and make it commercially viable in order to increase its internally generated revenue (IGR)?

Our runway is only 1.6km long; it is certified to carry an aircraft in the passenger capacity of 10-seater private jet. It’s not a commercial airfield. It was built specifically for flight training. The college some years back was looking at the possibility of extending the runway and making it a commercial airport, but with the change of government in 2015 that project was set aside because we had other priorities. But now, we have realised the need to extend the runway even if we are not going to have commercial flight. For instance, in May this year when the minister of aviation went around to commission some projects, he wanted to go to Zaria, but he couldn’t land. He and his team had to land in Kaduna Airport and had to go to Zaria by helicopter. A few months later, the Vice President, Prof. Yemi Osinbajo was going to Zaria on official visit, so, he too had to land in Kaduna and go by helicopter. So, with these experiences, we have now revisited the idea of increasing the length of the runway, but we need additional land. The current land the college has is not enough to accommodate the extension. So, we are looking at the possibility of acquiring additional land. The problem as you know is the issue of land encroachment. Some of the settlers in the neighborhood of the college have encroached into our land and the case is in the court. Unfortunately, the judge that was handling the case before died and it was reassigned to another judge. So, we can’t touch anything there until the case is determined in the court. I don’t know if we commence, the Federal Airports Authority of Nigeria (FAAN) will give us any money. FAAN is in control of all the airports and they keep all the revenues they make. They claimed that what they generate out of Zaria doesn’t even cover the overhead cost, but we are exploring other avenues of increasing our IGR.

What is NCAT doing about type rating of young pilots who graduated from the college without a job?

As you know, when a pilot graduates from school, he comes out with a Basic Commercial Pilot License and then with the type on the aircraft that he used for training. So, when he comes out and gets a job anywhere, if they are operating that kind of an aircraft he trained on, he doesn’t need additional training, but if it is in any other aircraft that is different, he must undergo type-rating training regardless of the size of the aircraft. So, you can imagine the number of training facility that you will need. For the bigger commercial aircraft, most of the training is done in simulator for cost effectiveness. We call them complex aircraft. When you fly complex aircraft, some of the manoeuvres and the emergencies that you have to be trained on cannot be carried out on actual aircraft. You can only do them on simulators. That is why you have to go to where they have simulators. For each aircraft type, there is a simulator that is providing this training. At NCAT, we recognised this gap and that was why we embarked on the acquisition of the B737NG simulator. That is the type that Arik Air operates. We envisaged that the B737 Classics are on their way out. That is why we decided to go for the New Generation (NG). This project would have been completed a long time ago. The initial process was to site the simulator in Lagos, but when this administration came into power in 2015, the decision was changed to site it in Zaria and there was no provision for the building that will accommodate this simulator. We looked at the possibility of using existing structures, but they are not suitable. So, we now had to start afresh by getting consultants that will design the building, we had to go through full procurement process, selecting contractors. We awarded that contract last year and the building as we speak is about 60 per cent completed. The structure is completed. We are only doing internal wiring, painting and stuff like that. That simulator we hope would be delivered to the college within the first quarter of 2020.

When we have that simulator installed, we will be able to offer type-rating courses on that B737NG. Now, as part of our plans for the future, we also made provision for a second simulator. So, if you go to the building, you will see that we have two simulator bases. We intend to install a second simulator. We are watching the industry to see if the national carrier comes; the type of equipment they are going to use will now guide us on the type of simulator to install. Once we have the national carrier, NCAT will play a big role in training a lot of the personnel.

What is your say on the number of pilots the International Air Transport Association (IATA) projected would be needed in the next few years?

In Nigeria, we don’t order a lot of aircraft; the biggest orders IATA is quoting are taken from Middle East and Asia. This is where most of the big orders are. In Europe and America, most of the aircraft are owed by leasing companies. These leasing companies are the actual owners of these aeroplanes and then they give them to airlines. If you can recall, one of the projects the Ministry of Aviation is pursuing is the establishment of leasing company. You know one of the challenges facing our domestic airlines is their inability to lease aircraft. Because of the past behaviour of airlines in Nigeria, the leasing companies are not willing to lease aircraft to Nigerian operators. That is why we identified the need to have our own leasing company that will now make it possible for Nigerian operators to have access to some of these new-state-of-the-art aircraft under comfortable and profitable terms. There will continue to be this gap for some time in Nigeria because we have quite a lot of unemployed people. So, it will take time before they are all fully employed and we as a training organisation will continue to train more personnel for the industry. Like I told you, we intend to increase our training capacity, but hopefully, the industry is growing, Africa is growing and there is a huge demand for air travel because people realise it is the safest and the most convenient form of transportation.