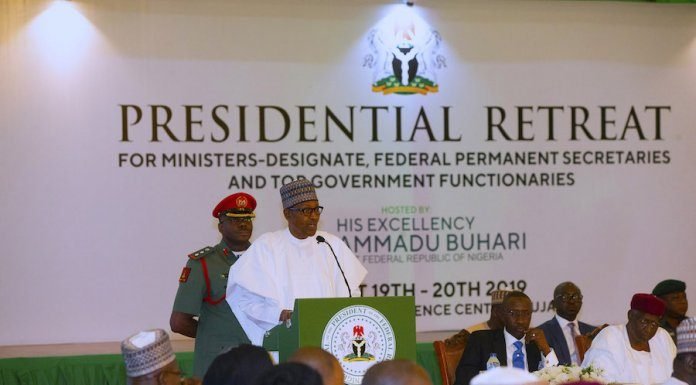 President Muhammadu Buhari during the two- day retreat which kick start today, has challenged Ministers-designate to reflect and assess the country’s position in 2015 and now, so as to chart a course for the country for the foreseeable future.

During the retreat, in his speech, the president gave the task when he declared open the two-day Presidential Retreat for Ministers-designate and Federal Permanent Secretaries at the State House conference hall, Abuja.

He explained that the purpose of the retreat was, among others, to familiarise the in-coming ministers with their colleagues at the Federal Executive Council (FEC) with whom they would work closely for the next four years.

President Buhari reminded the ministers-designate that they were appointed to assist and advise him on running the country efficiently.

“I congratulate all the newcomers who the country has chosen above others to join the first term ministers whose performance has been outstanding.

“All of you are appointed to assist and advise the president in running the affairs of our country.

“At the end of the retreat, it is hoped that all of you will be in tune with the roles and responsibilities of positions you will occupy in government. Many national issues require unified decisions.

“It is a great privilege for you to be called upon to serve in these great offices of state and you must grasp the chance with two hands and put in your best efforts as Nigeria today needs top managers to handle our numerous challenges.

“There will be long hours and you must be prepared to live laborious days if we are to serve our people optimally,’’ he said.

The president, who also spoke on the looming demographic potential of the country, charged the in-coming ministers to join hands in finding a solution to the frightening threat of population explosion of the country.

He said: “By average estimates, our population is close to 200 million today. By 2050, UN estimates put Nigeria third globally, behind only India and China with our projected population at 411 million.

“This is a frightening prospect but only if we sit idly by and expect handouts from so-called development partners. The solution to our problems lies within us.’’

President Buhari told them that the first term of his administration had identified three salient areas for close attention and action – to secure the country, to improve the economy and to fight corruption.

“None but the most partisan will dispute that we have made headway in all three areas:

“First, we have rolled back the frontiers of terrorism; we are actively addressing other challenges such as kidnappings, farmer-herder violence, improving the safety of our roads, railways, air traffic, and fire control capacities.

“Secondly, we are steadily turning the economy around through investment in agriculture and manufacturing, shoring up our foreign reserves, curbing inflation and improving the country’s infrastructure.

“Thirdly, we have recovered hundreds of billions of stolen assets and are actively pursuing control measures to tackle leakages in public resources. We will not let up in fighting corruption,’’ he said.

He told them that he would rely on them, his advisers and Nigerians willing and able to contribute to the administration’s policies, programs and projects to lift the bulk of the citizens out of poverty and set them on the road to prosperity.

According to him, his administration’s eight years will have laid the ground for lifting 100 million Nigerians out of poverty in 10 years.

“This outcome will fundamentally shift Nigeria’s trajectory and place us among the world’s great nations,’’ he added.

He told them that as ministers, they would be responsible for the development and implementation of policies, programs and projects in their various Ministries, Departments and Agencies (MDAs) in line with government priorities.

According to the president, the ministers must also ensure that agencies under their ministries are effective, efficient and accountable in the discharge of their responsibilities.

“Honourable Ministers-designate, we must work as a team. Although you have been chosen to represent your states as a constitutional imperative, it is vital for all of you to work as Nigerians.

“Also, working as a team demands that we know what the next person is doing. You must open communications with your colleagues. Lack of communication leads to lack of cooperation and sub-optimal performance.

“Finally, although this is called a retreat, I would like to think this is a preparation for an advance to the next level,’’ he further said.

The Secretary to the Government of the Federation, Mr Boss Mustapha, said the two-day presidential retreat was meant to be in sync with the policy direction of the government, and contribute to the attainment of the next level goals.

“The objective of this retreat is to prepare the new Cabinet of President Muhammadu Buhari’s second tenure, having been chosen to drive and coordinate the affairs and activities of the various socio-economic and political spheres of our nation.

“This assembly will afford participants the opportunity to familiarise themselves with their roles and responsibilities as cabinet ministers, an understanding that will help to shape and streamline efforts towards achieving the delivery of dividends of democracy,’’ he said.

Further speaking, he expressed hope that the outcome of the retreat would set a strategic agenda which would define the course of action for the next four years of the Buhari administration. 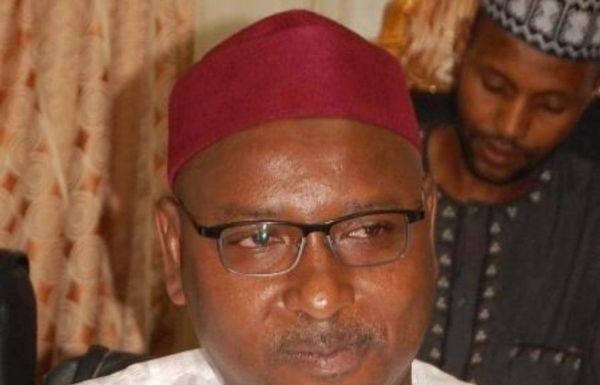 Over 27,000 fuel stations shut down in the Downstream Sector- OVH Energy, Hubb Stockman