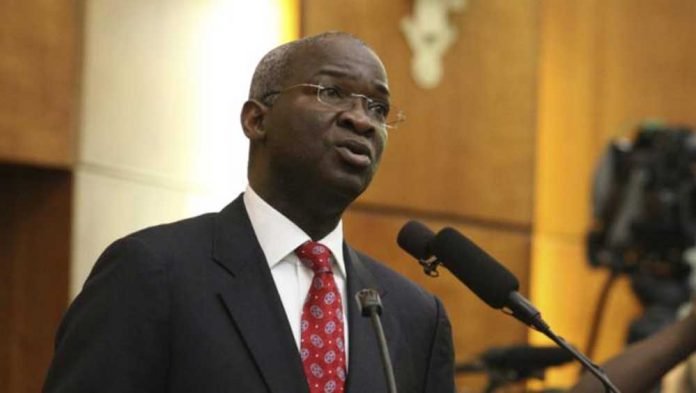 The Minister of Works, Power and Housing, Babatunde Raji Fashola has promised that all federal roads in Delta State will be completed soon.

The minister therefore commended the role played by Professor Pat Utomi, whom he said had been putting pressure on his ministry for the construction and rehabilitation of several roads in the state.

Fashola gave the assurance at his Mabushi office on yesterday when Utomi, a political economist and APC leader, paid him a courtesy call to thank him for the recent award of the contract for the rehabilitation of the Illah-Asaba road.

According to a statement by Utomi, the minister was said to have recalled his (Utomi)’s visit to him several months ago on the matter during which he promised an accelerated work on the Illah-Asaba road.

Fashola however said some knotty contractual challenges delayed the award of the contract and expressed satisfaction that work is about to commence on the road project.

Also present at the meeting was the Acting Director in the Ministry responsible for the project, Charles Okonma, who the minister has now directed to arrange an inspection visit to the work site with Utomi.

The minister urged the political economist, who also raised concerns on other roads to please extend his community leadership effort to urge those delaying the reconstruction of the Sapele-Agbor Road to have a rethink, having surreptitiously encroached on the road and demanding compensation.

Specifically, Fashola sought the help of Utomi to assist in urging the communities along the Sapele-Agbor project corridor to respect the federal government’s right-of-way which is 47.5 meters on both sides of the road from the median divide; as this would facilitate speedy completion of the project.

Responding, Utomi, while thanking the minister for giving credence to his requests, assured him that he is already developing capacity with communities in the state for people to cooperate with agencies of government for the advancement of their well-being.

Utomi also assured the works minister of steady partnership with any effort that would improve the quality of life of the people of Delta State.