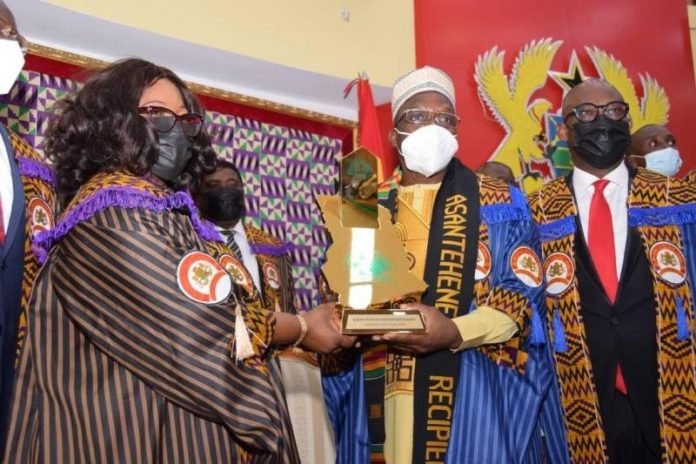 Speaker of Parliament Alban Sumana Kingsford Bagbin on Monday received the prestigious Millennium Excellence Award and pledged that he would continue to serve Ghanaians with integrity.

“I seize this opportunity to encourage all Ghanaians to strive for excellence with integrity,” the Speaker said at the conferment ceremony, at the Parliament House, in Accra; and added, “indeed, the meaning of integrity is so beautifully couched in the inspirational African proverb “A clean conscience makes a soft pillow.

“That is my pledge to Ghanaians – to serve with integrity.”

The Millennium Excellence Awards is one of the country’s most prestigious awards, held under the patronage of Asantehene, Otumfuo Osei Tutu II.

In this year’s edition, the twentieth, held at the Manhyia Palace, in Kumasi, had more than 60 personalities and corporate bodies conferred with awards.

The Speaker, was unavoidably absent at the ceremony, hence the shift to the House for the conferment of the award, which recongised him as the “Member of Parliament of the Decade”.

Aside being decorated with a sash, Speaker Bagbin was presented with a plaque in the shape of a map of Ghana, and honoured with a citation, as the Police Band sounded a post, followed by throbs of mighty fontonfrom drums.

“The Life Patron, HRM Otumfuo Osei Tutu II-, Asantehene and the illustrious Board of Governors of the Millennium Excellence Foundation, are pleased to confer on you the coveted Millennium Excellence Award for Member of Parliament of the Decade in high recognition of the outstanding contribution to national development as an MP.

“You are the true personification of the saying that if you give the world the best of what you have it will come back to you. Your rise to the office of the third most important person in the republic of Ghana is exemplary. In a country where the attrition rate of parliament is so high that Parliament can swing from over 60 majority in the seventh Parliament to an almost hanged in the eighth, your retention in Parliament since 1992 underscores the distinction with which you serve your people and country.

“By a miracle of fate, you were returned to the House from which you had voluntarily decided to retire from as the Speaker in the most dramatic of fashion as a reward for your commitment to excellence in service. Throughout your career, you served with brilliance maturity, an attribute that makes you appealing to people across the political divides. You have been a development agent, an advocate for democratic ideals and role model to many aspiring politicians. As Minority Leader, you kept the then NPP Government on its toes and even as Majority Leader, you did not hesitate to stand against your own Government when you felt it’s necessary. You are a true democrat, patriot and legend.”

Speaker Bagbin thanked the Almighty God whose favour and mercies, he said had brought him that far and for guiding the recognition of him for the award.

He said: “His guidance over the years has given me the opportunity, needed, strength and fortitude to serve this House in various capacities; first as a Member of Parliament, then as Chairman of various Committees, Minority Leader, Majority Leader, Second Deputy Speaker and today, the Speaker of this Parliament, an institution of might and majesty. I owe this award to His continuous grace and blessings.

The Speaker also acknowledged individuals who in diverse ways contributed to the success of my political career which culminated in the recognition.

“I recognize my immediate and larger family, whose love, prayers and support have helped me through thick and thin to weather the storms in the bumpy terrain of politics to see this day in its glory. I also recognize the positive impact of the Speakers, Leadership and Members of Parliament, both past and present, on my political career and I am indeed grateful to all.”

He further thanked the people of Nadowli/Kaleo, who he served as their MP over the period, for giving him the mandate that kept him in the House.

He added: “To the great National Democratic Congress, the platform that propelled me to stardom, you will forever grow from strength to strength and from victory unto victory to continue to give birth to more iconic leaders in the country and the world.

Speakar Bagbin expressed appreciation for the recognition that had been bestowed on him “to crown my over 28 years in Parliament from 1993 to date, dedicated the award to the Almighty God and to the people of the Nadowli/Kaleo Constituency.

The Speaker, the first to be elected, not from the party in government, in Ghana’s post independent political history repeated his pledge at his inauguration ceremony, to collaborate with the Leadership and the entire House to develop the nation’s democracy.

He reminded the Members of the House that their conduct both on the floor of the House and outside the precinct of Parliament was under scrutiny, stressing working together to preserve and enhance the peace and development of our dear country.

He described the award as representing a call on the general public to partner with the Legislature to ensure a broad participatory approach in our democratic dispensation.

First Deputy Speaker Joseph Osei Owusu, who was in the chaired proceedings for the day, congratulated Speaker Bagbin on the award, amidst shouts of “Father oo Father”, and “Hail Bagbin” from both Sides of the House. Majority Leader Osei Kyei Mensa Bonsu, who yielded to his deputy Alexander Afenyo-Markin congratulated the Speaker on the award and urged back benchers in the House, to exhibit patience and industry for due recognition at the appropriate time.

He observed that the approach of the Speaker to affairs of the House was an indication that Parliament would not work for the Executive but would demand greater accountability.

Events at the awards ceremony televised to the House showed President Nana Addo Dankwa Akufo-Addo extolling the winners for their untiring desire in pursuit of their goals.

Otumfuo Osei Tutu, the Life Patron of the Awards Scheme expressed the hope that awards would inspire the younger generation for excellence.