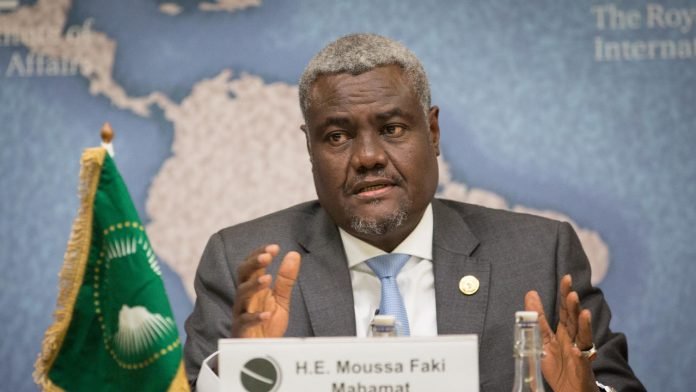 The Chairperson of the African Union Commission, Moussa Faki Mahamat has condemned the recent unrest in South Africa after the arrest of former President Jacob Zuma.

In a statement via the continental commissions websites, Mr Faki said he condemn in the strongest terms the surge of violence that has resulted in the deaths of civilians and appalling scenes of the looting of public and private property, destruction of infrastructure, including the suspension of essential services in Kwazulu-Natal, Gauteng and other parts of South Africa.

The Chairperson extends his deepest condolences to the families of the victims and wishes a rapid and full recovery to the wounded.

He called for an urgent restoration of order, peace and stability in the country in full respect of the rule of law. He stresses that failure to do so can have grave impacts not only in the country but the Region as a whole.

The Chairperson reiterates the full and unwavering solidarity of the African Union Commission with the government and people of South Africa.

Last week after the arrest of Zuma, his supporters started blockading major roads that and demanded the release of their political hero.

Many South Africans have been shaken by the riots that have swept through areas including KwaZulu-Natal and the economic hub of Gauteng.

South African security forces have arrested 1,754 people in connection with days of looting and violence, a senior minister in the presidency’s office said.

Over 70 persons are feared dead as a result of the violence since its emergence.

Ghana to get Pfizer, Moderna vaccines by end of August

NEMA distributes relief materials to over 2000 victims of gunmen attracts...