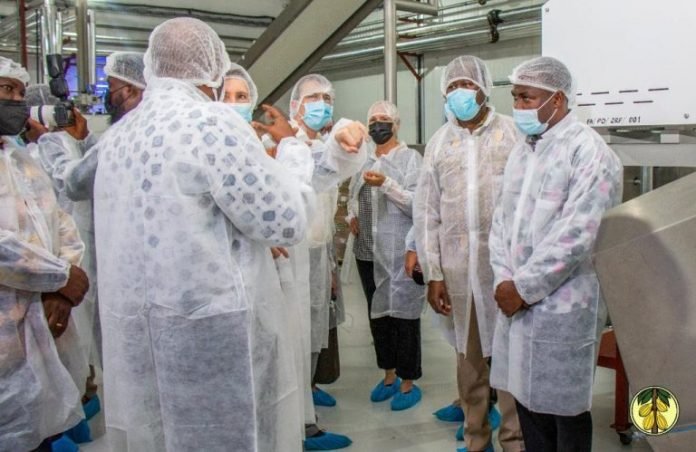 The Chief Executive of Ghana Cocoa Board (COCOBOD), Joseph Boahen Aidoo, says Switzerland can strengthen its existing economic ties with Ghana by supporting the effort of the Ghanaian government to expand the local cocoa processing and value addition sector.

Such support, he explained, can be in the form of partnerships to establish more processing factories in Ghana to feed the international market with finished or semifinished processed cocoa.

Mr Aidoo made this call when he joined a team led by the Swiss Minister for Environment, Transport, Energy and Communications, Simonetta Sommaruga, to tour the Yayra Glover warehouse and FairAfric chocolate factory at Suhum, in the Eastern Region.

He added that other avenues which can be explored together include the promotion of organic and sustainable practices on cocoa farms; the modernisation of cocoa farming, particularly, through the provision of irrigation systems; and advocating for farmers to earn a decent income from their produce.

The tour was organised as part of a four-day working visit to Ghana by the Swiss Minister.

Also on the tour was a delegation from the Swiss Embassy in Ghana, including the Ambassador, Philipp Stalder.

Mr Aidoo said the visit by the Swiss Minister was timely because it coincided with the period when Ghana is engaged in discussions with the European Union (EU) on sustainable cocoa production.

He noted the policies of COCOBOD are aligned with the global common agenda to maintain and improve forests.

As such, COCOBOD is championing the practice of agroforestry in Ghana. Cocoa trees, he stated, are forest trees which grow best in the company of other forest vegetation and that is why farmers grow other crops on their farms and as well, grow tall permanent shade trees.

Satellite images reveal that the parts of Ghana which have lost most of their vegetation over the years are parts where cocoa is not grown but through cocoa agroforestry, these parts can be made green again and their vegetations restored, he said.

COCOBOD, Mr Aidoo added, also teaches farmers the advantages of organic cocoa farming. The use of pesticides and weedicides on cocoa farms have also been banned because of their negative effect on biodiversity.

The Swiss Minister, Simonetta Sommaruga, acknowledged the importance of Ghana’s cocoa sector to Switzerland. She stated with the growth in global demand for more organic products, it is important that Ghana continues to encourage more organic cocoa cultivation.

She said, she was in the country because Ghana and Switzerland have signed an agreement on climate change which means that her country will invest in climate protection projects in Ghana. “This agreement is good for both Ghana and Switzerland”, she noted, “and for sustainable investments. I’m very glad because cooperation between our two countries works very well.”

DCOP Mensah Duku honored by Police Administration as he retires after 31 years of...